5 / 5 ( 4 Reviews )
2 Comments Jump to Recipe
Pizza Friday never tasted so good as when you have this BBQ Chicken Naan Pizza recipe. So simple to throw together and has amazing flavor.
Jan 23, 2023 The links in the post below may be affiliate links. Read the full disclosure I don’t know about you, but Fridays tend to be our pizza nights, and with this BBQ chicken naan pizza recipe, pizza night got even easier. You can make these naan pizza’s in less than 30 minutes, and enjoy your own pizza built how you want!

Plus, by the end of the week, I always welcome a super simple dinner recipe that still tastes delicious. It is even a recipe I can trust my kids to make too if they need a quick meal or snack.

Other great recipes that are super simple to make can be found in my YouTube video which is filled with 10 easy air fryer recipes to make! Does the Chicken Need to Be Cooked Beforehand?

Can Dried Cilantro Be Used Instead? 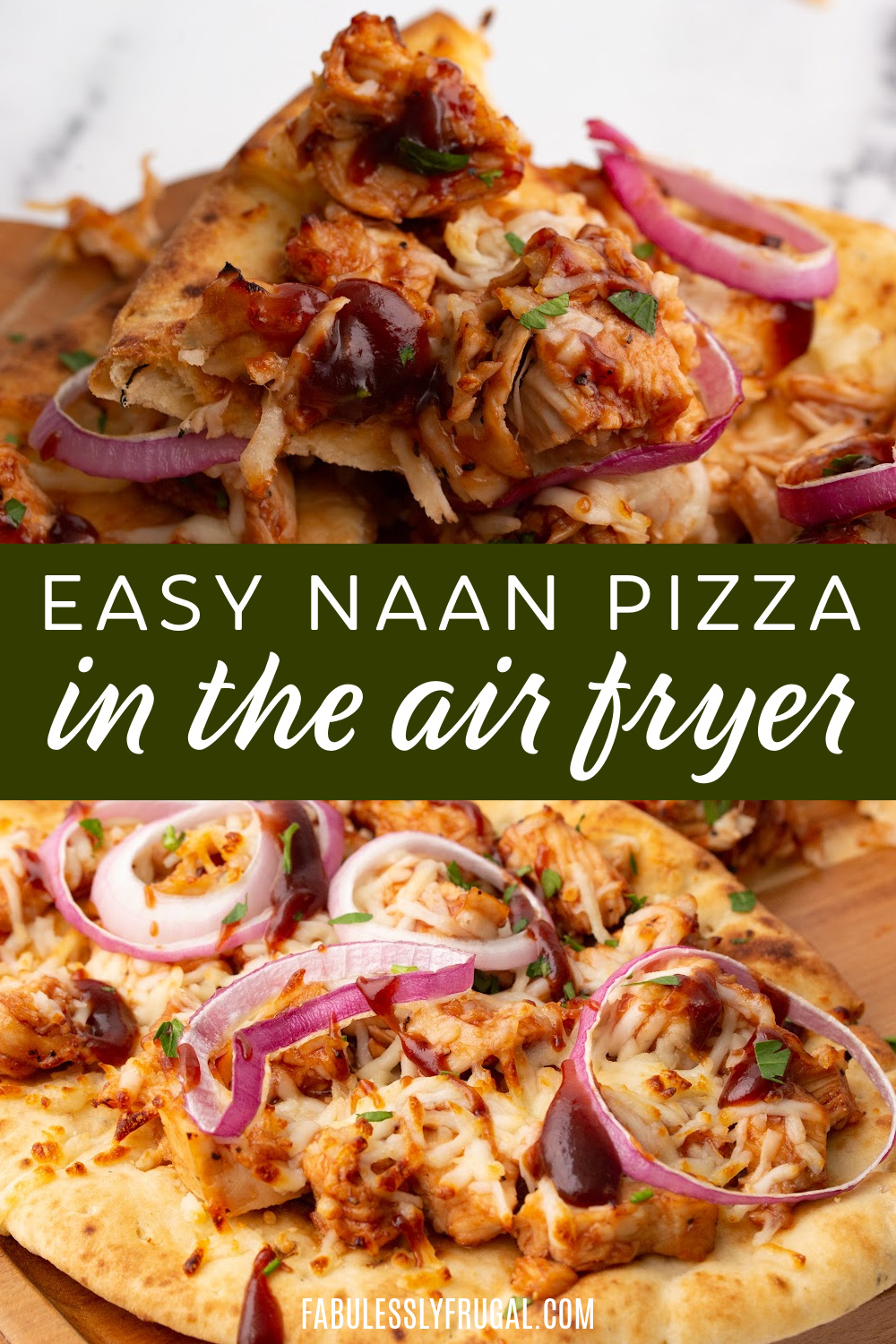 Make Your Own Naan Bread

If you love making things from scratch, you can always make your own naan bread. Lil’ Luna has a great homemade naan bread recipe that you can make for this pizza recipe.

However, if you want to keep this recipe super simple, the Stonefire naan bread near the deli section is what I love to use. When you are ready to make this BBQ chicken pizza, you will need to make sure that the chicken is already cooked. You can cook it in the chicken, in the air fryer, or in the Instant pot, however ever you normally like to cook chicken breast just make sure it is 165 degrees F or 73 degrees C internally. Chop the cooked chicken up into small pieces and then combine it in a small mixing bowl with the BBQ sauce to make sure the chicken is completely covered. After the chicken is prepared, layer the naan bread with a layer of BBQ sauce, chopped BBQ chicken, mozzarella cheese, and sliced red onion. Carefully place the pizza in the air fryer basket and let it cook for about 3-5 minutes at 380 degrees F or 193 degrees C or until the cheese has melted. Remove the BBQ chicken pizza from the air fryer and top the pizza with fresh cilantro, maybe even more BBQ sauce, and enjoy!

Types of Pizza to Make in the Air Fryer!

Pizza is always a great way to end the week. Let me give you even more great recipes and to make with your air fryer for those pizza nights.

Load Up on the Pizza Flavors: Quick, easy, and delicious all perfectly describe this BBQ chicken naan pizza. It is so delicious and you can make it in less than 30 minutes, which is great when you are out of energy at the end of the week.

I also love that I can put as much sauce and cheese on my pizza as I want! Plus serve it with a side of BBQ sauce for extra dipping. Do you like your pizzas with extra sauce or light sauce? The naan I get from the store normally comes in packs of 2. This recipe is great for one. You can store the naan bread in the fridge and make this recipe again for later. I like to heat up the naan bread while the air fryer preheats. Just place it in the air fryer basket for 2-3 minutes during the preheating.

Recipe Adapted From: Bowl of Delicious

Keep up to date on our newest air fryer recipes! Convert your living room into a comfortable bed with this Easyfashion Sofa Bed with Pull Out Bed for only $143 Shipped Free (Reg. $197)

ABCmouse Back to School Sale, Keep the Kids Entertained and Learning! 1 Year for Just $45 + FREE Apps To Use Without Wi-Fi

Check out this FAB Accurate, Fast, Wireless Smart Meat Thermometer & Save with our code!