How to Build a Lean-to Greenhouse for Under $100

Feb 8, 2019 30 comments The links in the post below may be affiliate links. Read the full disclosure How to Build a Lean-to Greenhouse Under $100 This winter, I decided that I wanted to try to build a greenhouse for our garden. The growing season here in central Oregon is very short (we generally get our last freeze in mid-June) and I wanted somewhere other than my bedroom window to start plants from seed.

Since I am frugally minded and like to upcycle as much as I can, I decided that we (my husband and I) would attempt to build a greenhouse using as many on-hand materials as possible, for less than $100. One. Hundred. Bucks.

So I went on over to Pinterest and found this little build that spoke to me: I love how this builder used what he had on hand to make something he wanted…and that’s precisely what I specialize in. That’s weird to say…I rarely feel like I specialize in anything.

But, regardless, I identified with this guy because I had a lot of what he had: old windows, extra lumber, and creativity. So I want to share with you, step by step, how my husband and I successfully built our own greenhouse for less than $100, and encourage you to try to do the same. This is what we started with:

So, now onto the build…and instructions for you.

I didn’t draw it out, but I knew that the plan was to build a “lean-to” greenhouse design. This worked best with the materials we had on hand, especially the large roof-top window.

We knew that the best way to build the greenhouse using our materials was to build the frame around the windows we had on hand. For each wall, we set the windows or doors on the ground and fitted 2×4′s around them until we had the shape that we wanted.

Here’s what the back wall and two identical side walls looked like:

To keep it together, we used a combination of screws and nails (nails were cheaper, but screws were stronger). I will say this… It helps to have someone who has done some framing before. Had I been on my own, I would have been lost. My husband knows his way around a hammer and a box of nails, that’s for sure.

Step 3: Secure the 4 walls together.

We used our Torx screws to secure the walls together and came up with this basic framework. I love this lean-to shape because it allows me to stand up straight inside and have plenty of space for shelves. Our design incorporated some fixed windows and some hinged windows (to allow proper ventilation). I used our pin nailer and air compressor, as well as the old fashioned hammer and nails to do most of the work on this step.

Each opening needed to have a frame built into it to tack the antique window in place (kind of like a window sill or a door jamb). Yeah, like a jamb. That’s what I’ll call it.

So I measured each opening and cut 4 pieces of scrap hemlock to use as a jamb in each space. However, they did need to be ripped down to approximately ¾”x ¾” strips. So, once the length for each piece was cut, I ripped them down on the table saw.

I framed out each opening, using my hammer and nails. I set the jams far enough back in each opening to ensure that the window’s depth would fit onto the 2”x4” framing it. Basically, I made sure the window didn’t stick out but was encased. 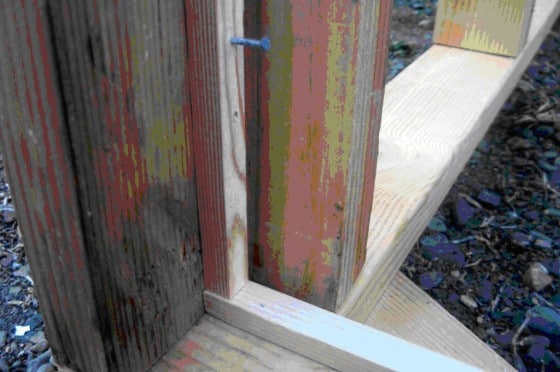 Once the jamb was in place, I tacked each window to the jamb using my pin nailer and 2” nails.

We decided to have 2 side windows that open for venting, as well as the back door and the roof. And that meant that each of those windows or doors needed to be set on hinges instead of nailed into place. To do this, I created the same kind of jamb for the opening but set it back just enough for the front of the window (when hung) to be flush with the outside wall of the greenhouse.

The jamb allowed the door to open outward but not inward. This is good because we have built-in shelving inside the greenhouse and I don’t want that window to bang into shelving and potentially break the glass.

Once I placed the jamb, I pre-drilled holes for the reclaimed hinges I had on hand and then screwed the hinges into place. 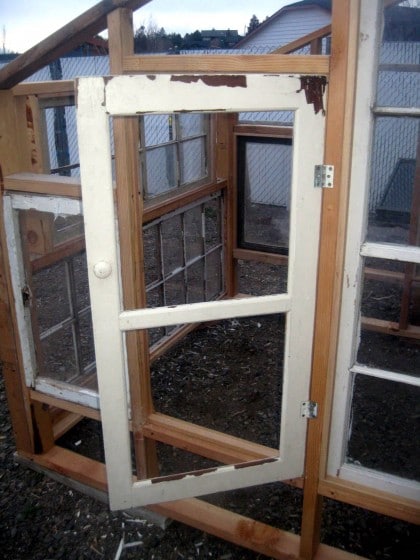 As you can see in the picture above, there are spaces in the wall where there are no windows. There are also a few window frames that were broken out that my husband replaced. He used to be a window glazer and we had some extra glass on hand, so we didn’t need to pay anyone money to replace anything. Score!

If you are using windows and don’t have the manpower to cut and replace glass, you can simply use greenhouse plastic and a staple gun and get the same effect. For our holes, we created jambs in the openings, cut some plastic, and then stapled it into place, making sure it was nice and tight in the process.

And because the force of the staple gun would have torn through the plastic, we cut and measured the 2nd jamb for each opening and stapled the plastic in between the 2. Worked perfectly.

Using greenhouse plastic is a very cost-effective way of building your entire greenhouse quite honestly. The whole roll was only $8.00 and there is a TON of it in each package.

The roof was a little tricky. For ours, we wanted to use the large 5’x5’ antique window we had on hand, so my husband built a fixed frame around it and securely attached it to the structure.

Then, he added the window, using hinges, so we could open it for ventilation. The hinges used to keep the window popped up were salvaged from one of the windows in the greenhouse. They work perfectly!

You can probably see in the picture above the fact that 3 of the panels had glass in them and the one on the far left has plastic. See, this right here proves the point that the greenhouse wasn’t all about looking good. It was more about functionality and using what we had on hand. We just couldn’t find another piece of glass large enough to finish the roof, so we used plastic. No big dealie-o.

So, with that, the greenhouse was actually built, fully enclosed and ready to go.

During the greenhouse project, my gardening friend, Jobey, gave me 12 cedar crates that she wasn’t using anymore for her own greenhouse. I decided to use the cedar crates as shelving inside my greenhouse.

My husband installed 2 supports at about 36 inches high, one against the front wall, and one about 18″ from the wall for the boxes to rest on.

I was able to fit 5 across, nice and snug. I like this system because when it’s time to transplant, I can simply take the crate out with all of the plants, rather than find something to hold them all later.

If you are building, you might want solid shelves…go for it! And instead of building a floor-level shelf, I am happy if plants sit in the other crates right on the ground, since our gravel drains well.

On the outside, we installed some leftover gutters we had on hand to the exterior front wall of the ‘house: Gutter gardening is a great way to garden if you don’t have a lot of space on the ground and are growing shallow rooted veggies. We are planting the cutest little round Parisian carrots in the gutters for our daughter. I can’t wait until they grow. And talk about a way to increase your space to grow!!! We’re goin’ vertical, baby!

Then, I batted my eyelashes, and my husband scavenged up some scrap lumber and built me an actual work table, which was really nice. Yes, I’m spoiled, this I know. But I don’t get shiny jewelry or pretty perfume from my man…I get a workbench. And much preferred too!

That’s How to Build a Greenhouse for Cheap!

I hope to paint the ‘house one day, but maybe next year…

At the beginning of the process, I told you all that we were going to do this for under $100. And while I completely failed at keeping actual cost records, I can ballpark it for you. There’s still time to build your own greenhouse, you know…so get your creative thinking hat on, figure out what you have on hand and what you need to buy, and get to work! My work here is done… Need a Vacation? Run to Disney Where you can Get an Extra Day and Night FREE

Snag 18+ Items for $28.78 (Reg. $104+) Shipped Free – Get Your Cleaning and Home Essentials Taken Care of with Grove Collaborative